What would you do with the Isla del Rey?

Not long ago, the result of a survey in which the magazine “Menorca Grafica” asked this question to people known on the island and belonging to different environments, fell into my hands. This was done in April 1986, when the King’s Island had been abandoned for 22 years and still had another 18 years of deterioration.

The answers at that time were not very optimistic:

“I would make a theatre absolutely Mediterranean and maritime” was the response of a well-known actor who was certainly missing a stage.

– “The logical solution for the King’s Island is a zoo” according to the opinion of a Dutchman established in Menorca, a nature lover.

– “I don’t think there’s anyone with the courage to do anything there. Today that’s an islet that’s completely ruined.” A businessman, owner of a centrally located coffee shop, who showed a certain defeatist spirit not without reason, said.

-It would be nice to have a place where we could go by boat and enjoy the scenery. The ideal for me would be a natural park, and that we could enjoy nature as it is” suggested the president of a neighbourhood association, who was keen to improve the view of the port.

– “That the Town Hall should rent the land to a private company, fine, but not to become a privileged site for billionaires… The first thing to do is to arrange the accesses. Not forgetting that the project would have to include and absorb tourism.” A well-known architect commented, thinking of its economic usefulness.

– “I would put up a super-luxury hotel, like “Puente Romano” in Puerto Banús. With moorings to attract yachts and a clinic for rejuvenation. Totally privatized”. It was the opinion of one Travel Agency.

They were ideas that in a way recognized the possibilities of the Island and without a doubt denounced its level of deterioration. Perhaps there were other more conservative opinions but we do not know them. 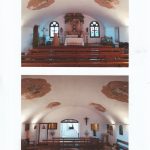 During the years of abandonment there were various intentions, competitions of ideas, projects, auctions (which didn’t give any result), even cession -reversible- to the Ministry of Information and Tourism in view of the possibility of converting the historic building into a Parador Nacional. Many works and projects were rejected because they did not meet the requirements set by the City Council. These were:

– To preserve the natural character of the island as a landscape fact in the context of the bay of Mahon.

– To sufficiently appreciate and enhance the existing architectural environment.

– To provide imaginative solutions in terms of uses and economic proposals.

– To justify the economic autonomy of the proposals, both at the time of their implementation and their subsequent management.

In 2004, after forty years of abandonment and lack of vigilance, the situation became unsustainable. Vegetation had grown uncontrollably all over the island, reaching as far as the second floor of the main building; unchannelled water had entered through the fractures in the roof, producing an apparently irreversible deterioration; rats and pigeons had nested and filled the rooms and spaces in the buildings with excrement. And, finally, the plundering to which any abandoned building is usually submitted, made doors, windows, beams, tiles and any element that could have a use disappear. What was left was a veritable ruin.

But the one known as Illa dels Conills, Isla del Rey, Isla del Hospital or Bloody Island, proud of its situation and its history, resisted disappearing and managed to attract the attention of its neighbours  making them feel the shame of its abandonment.

Thus was born, on the initiative of the Society, with a private, voluntary and disinterested character, the task of recovering the Isla del Rey, its historical building and annexed elements, and its history. At that time it was difficult to foresee the future of this intention. There was a good reason for this, but there were doubts as to the viability of the project.   The Association of “Friends of the Illa de l’Hospital” was created and later the “Isla del Rey Hospital Foundation” whose objectives, of general and cultural interest, were

At the beginning, with our own tools and in private boats, we began the task of clearing the debris, opening up routes through the dense vegetation that prevented passage and gradually recovering what was  possible. These were very limited means, but the collaborators had the hope of cleaning up the environment without thinking too much about what the final result would be.

Today we know that not everyone shared the idea, or sympathized with it. The enthusiastic support of some clashed with the disinterest of others, the ignorance of many or the frank opposition of others.

Rarely have the institutions felt committed to the project and there has always been the feeling that the activity to be carried out had to struggle with all the difficulties posed by bureaucracy, having had very little help from the Administration to resolve conflicts.

However, fifteen years later, we can be proud of what we have achieved. It is good to look back and draw conclusions from the activity carried out. The individual activities seem to be small, such as contributions of time and knowledge, of material and effort but that conveniently coordinated and within the framework of an unquestionable discipline and commitment make the Foundation work. Those who, with greater dedication, are leading the way, setting objectives and attending to the difficulties that arise, know that they can count on the unquestionable will of others who will follow the plan that has been drawn up. And the whole thing works.

It is not in vain that those of us who receive or attend to visitors observe that what most impresses them about their visit is the way the volunteers carry out their activities and the spirit of collaboration that they perceive. Much more than the beauty of the surroundings or the progress in the recovery of buildings and their history, which in spite of everything presents a very positive balance.

At this time when we can see what has been achieved and the immediate projects in development are defined, it is not superfluous to have a memory for all those who have dedicated their efforts and enthusiasm during this long period of time. Some have died, others have had to leave because they were absent from the island, and those who have added too many years to those they already had, or those who have collaborated temporarily. And also to those who join when they know the environment and its atmosphere, offering a necessary relief.  And, of course, to the faithful who maintain their constant attention and assistance, perhaps for that very reason less visible, but who have left countless hours of work on the King’s Island. Those who have collaborated and continue to do so in any way with help of all kinds. And those who visit us, who with the help of the volunteers and collaborators make up this small world that emerges in the centre of the Port of Mahon.